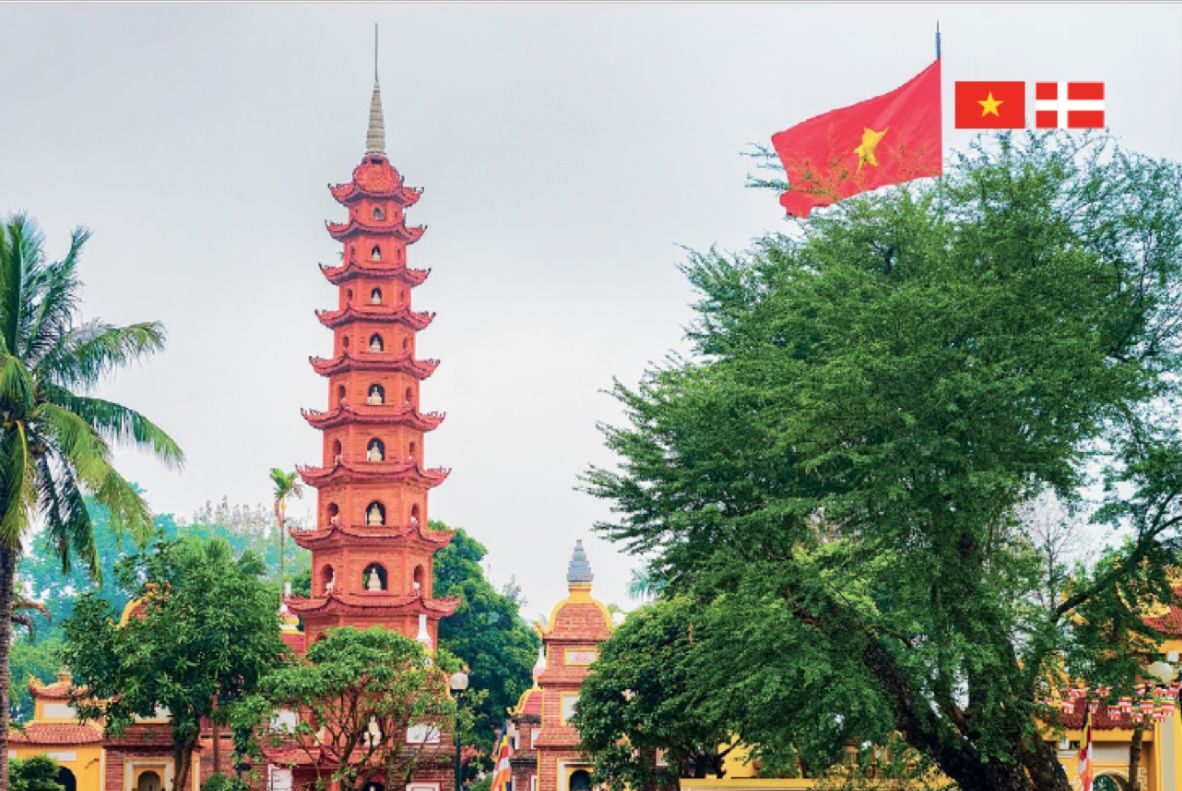 Why Vietnam? As a top-performing Asian economy and a lower-middle-income country, the Vietnamese economy has been growing by 5 – 7% annually since 2000. Despite the COVID-19 pandemic, the country reached GDP growth rates of 2 – 3% throughout 2020 and 2021 and is expected to return to the 4 – 7% range in 2022. Further, the new free trade agreement between Vietnam and the European Union, which entered into force in August 2020, opens up new commercial opportunities. Denmark is considered a committed, innovative and stable partner for Vietnam. Vietnam constitutes an increasingly interesting market for Danish companies and a strategic partner for Denmark in the transition to a greener and more sustainable future. The growing demand in Vietnam for green solutions, especially within renewable energy and energy efficiency, provides considerable potential for further deepening of Danish-Vietnamese cooperation, trade, and export.

Why attend? Vietnam is making critical decisions on the green transition and energy investments – and constitutes an increasingly interesting market for Danish companies supporting the transition to a greener future.

Their Royal Highnesses The Crown Prince and The Crown Princess will visit Vietnam in November 2022 to celebrate the 50th anniversary of Danish-Vietnamese diplomatic relations established back in November 1971. On this very special occasion, an official Danish business delegation will travel to Vietnam.

Delegates will participate in an interesting programme of networking events, seminars and site visits. Delegates will meet customers and partners as well as gain insights into new market opportunities in Vietnam. The visit provides
an excellent opportunity for Danish companies to acquire and nurture business contacts in Vietnam and to meet with business representatives, organisations, public authorities and media.

The overall theme of the visit is renewable energy.

The activities and events during the visit will take place within two sector tracks (mentioned below):

Denmark has supported Vietnam’s energy efficiency agenda since 2009. In 2017, the Danish cooperation with Vietnam was consolidated under the Danish Energy Partnership Programme (DEPP), which aims to support Vietnam in achieving the national commitment under the Paris Agreement.

The programme has been instrumental in developing the capacity of Vietnamese authorities in energy planning, integration of renewable energy and energy efficiency in the industrial sector.

Clear messages were delivered in the Vietnam Energy Outlook Report 2021 (EOR21), which was developed in close collaboration between the Danish Energy Agency (DEA), the Embassy of Denmark and the Vietnamese Ministry of Industry and Trade and launched early June 2022. The report concluded that there is great potential for green transition in Vietnam, which by 2050 can become a net zero-carbon economy as set out by Vietnamese Prime Minister Pham Minh Chinh during COP26 in Glasgow.

In the decade to come, Vietnam will need to supply the country’s growing economy with sufficient and reliable power sources to meet the country’s socio-economic goals, while at the same time reducing greenhouse gas emissions. According to the latest draft of Vietnam’s 8th Power Development Plan (PDP8) the total installed capacity for power production is about 120,995 – 145,930 MW in 2030 and 284,660 – 387,875 MW in 2045 compared to 56 GW in 2019.

The Danish Energy Agency has provided technical input to an offshore wind roadmap suggesting a volume target of 10 GW in 2030 and continues to support the development of a necessary regulatory framework for offshore wind.

The sector programme will focus on the entire value chain of the wind industry.

Energy efficiency in the industry

Vietnam’s growth has been driven by industrialization, and the country is currently one of the most energy intensive economies not only in the ASEAN region but globally. According to the International Energy Agency (IEA), Vietnam’s use of energy holds great potential for optimization. Today, Vietnam has the highest energy consumption per produced unit of GDP in the ASEAN region. The industry accounts for 49% of the total national energy consumption. Consequently, Vietnam’s energy related CO2 emission intensity is among the highest in the world.

The Danish Energy Partnership Programme (DEPP) is providing technical input at central and provincial levels on enforcing compliance of the energy legislation. Efforts are focused on implementing necessary energy efficiency regulation in the energy intensive industrial sector in selected partner provinces and assisting 63 provinces in developing energy efficiency action plans. An incentive scheme and an ‘energy efficiency technology catalogue’ inspired by Danish experiences is planned within selected high-intensive energy industries in Vietnam. The cooperation creates an opening for Danish technologies and solutions to be further explored.

The sector programme will focus on energy efficiency in the manufacturing industry through technology, machinery and process optimization.

For more information about the sector-specific content, please visit www.mfa-events.dk/danishroyalvisittovietnam2022.

The latest version of the programme will be available on the website at all times.

The EU has always been the most important partner of Việt Nam as the latter has always been an attractive investment destination for European firms, according to Phạm Tấn Công, Chairman of the Vietnam Chamber of Commerce and Industry, at the Việt Nam-EU Agribusiness Forum on July 11.

Công said the EU-Vietnam Free Trade Agreement (EVFTA) has improved bilateral trade and kept Việt Nam afloat at a growth rate of 2.58 per cent during the pandemic. In 2021, Vietnamese exports to the EU hit US$40.6 billion and imports hit $16.89 billion, up over 14 per cent year-on-year.

The EU remains Việt Nam’s third-largest agricultural importer with an annual turnover of $5.5 billion. However, the figures account for just 4 per cent of the EU’s total agricultural imports, indicating that room for trade growth is still ample for Vietnamese producers.

Phùng Đức Tiến, Deputy Minister of Agriculture and Rural Development, remarked that EU and Vietnamese agricultural exports never compete but support each other.

Việt Nam exports coffee, nuts, pepper, seafood and wood products to the EU whereas trade includes agricultural equipment, machines and animal feed in the other direction.

The deputy minister underscored the EU as a key partner and a large importer of Vietnamese farm produce. Bilateral commercial figures have been increasing steadily since the EVFTA came into effect.

He said his ministry is ready to closely cooperate with the EU in trade facilitation, to ensure technical requirements be applied in line with global norms and no trade barriers be established without adequate evidence.

Janusz Wojciechowski, EU High Commissioner for Agriculture, asserted that Việt Nam has become an important partner of the EU in Southeast Asia since the EVFTA took effect in 2020.

Thanks to the agreement, EU customers have had a chance to get a taste of Vietnamese tea and coffee and get their hands on various other products including nuts, spices and fruit.

Some of these products were granted Protected geographical indication such as Lục Ngạn seedless lychees and Bảo Lâm seedless persimmons. Others products benefited greatly from the preferential tariffs under EVFTA, entering the EU market duty-free.

However, the commissioner remarked that bilateral trade has been skewed in favour of Việt Nam by around 1 billion euros. He opined that both sides should create a more balanced trade pattern in the short term to maintain sound commercial relations.

He also expressed his wish to discuss with Vietnamese authorities on the abolishment of some existing trade barriers related to phytosanitary standards to further boost bilateral trade. Việt Nam’s mounting excise tax on alcoholic beverages is also a matter of concern for EU exporters.

He revealed that the EU will support Vietnamese cacao through a project of around 1.6 million euros in the coming years. The project is part of a series of EU projects designed to help Việt Nam develop sustainable agriculture and deal with environmental problems.

Việt Nam has selected six priority industries for support development, including textiles and garment, footwear, electronics, automobiles, mechanics and high technology. The country needs to promote bridges between domestic and FDI enterprises to improve its position in the global value chain.

The Ministry of Industry and Trade jointly organised the event with the Việt Nam Chamber of Commerce and Industry, the Việt Nam General Confederation of Labour and Samsung Vietnam.

Speaking at the event, Deputy Minister of Industry and Trade Đỗ Thắng Hải said that industrialisation and modernisation had been a goal of the Party and State since the 3rd Congress.

Through 35 years of persistently implementing this goal, Việt Nam’s industry has achieved certain achievements. As a result, the scale of Việt Nam’s economy in 2021 reached about US$370 billion, making it the 4th largest economy in Southeast Asia; per capita income of more than $3,700; trade scale reached $670 billion, belonging to the group of 20 leading economies in terms of international trade.

“Việt Nam has signed 15 free trade agreements with more than 60 countries and territories, including the largest markets in the world, and increasingly diversifying markets, products and supply chains,” he said.

In addition, the manufacturing industry is increasingly asserting its important role in the economy, with its contribution to GDP increasing from 13 per cent in 2010 to 16.7 per cent in 2020. The industry’s structure has changed, gradually reducing the proportion of resource-intensive and low-tech industries and progressively increasing the proportion of medium- and high-tech industries.

“Facing the challenges of climate change and the requirements of consumers around the world, especially in the developed countries, the trend of sustainable development, efficient use of resources, and responsibility for inspection are becoming an inevitable trend of the global industry in the coming period. In addition to the need to produce faster, lower costs, and better quality, today’s production must also be more responsible for the environment and people,” Hải said.

He said: “This poses many challenges for industrial products manufactured in Việt Nam, mainly of processing nature, added value, low in science and technology content, not yet accessible to the digital transformation towards smart production.”

Bùi Trung Nghĩa, deputy chairman of the Việt Nam Chamber of Commerce and Industry (VCCI), said: “To accelerate the post-pandemic recovery in the direction of more balanced and sustainable development, Việt Nam needs to continue to accelerate economic reform through a long-term, closely coordinated strategy of many stakeholders.”

“Furthermore, the overall and comprehensive assessment of dynamic capabilities helps businesses adapt to changes based on integrating and repositioning the organisation’s resources; as well as the capacity for innovation and networking of enterprises, and it is an immediate and important task to solve the difficult problems that are posed to Việt Nam in the new stage of development.”

Phan Văn Anh, vice chairman of the Việt Nam General Confederation of Labour, said: “The deeper participation in the world supply chain brings many opportunities but also poses many challenges for both businesses, workers and trade unions in Việt Nam, in which, ensuring workers’ rights following the law, responsible business requirements, and sustainable development is one of the significant goals and needs special attention.”

Choi Joo Ho, president of Samsung Vietnam, said: “Việt Nam has several advantages, including its efforts in attracting foreign investment and the consistency of the Government’s economic development policy, along with a dynamic economy, an expanding consume market. I think what is needed to double and further develop these advantages is to expand participation in the global supply chain by promoting the supporting industry in Việt Nam, and it is necessary to have medium and long-term efforts in the future.”

“The MSF has become a significant and growing programme as a gathering place for parties with common interests, meeting to share knowledge and experience, and increasing learning opportunities. In the coming time, Samsung Vietnam will continuously strive to increase cooperation for the development and prosperity of the community.”

The Multilateral Stakeholder Forum (MSF) is an initiative of Samsung Vietnam, which has been held annually in Việt Nam since 2018 to connect all stakeholders, including policymakers, NGOs, civil society organisations, experts, researchers and businesses. Through this annual event, ideas, solutions and initiatives are shared and discussed, inspiring action and positive energy and effectively contributing to solving essential problems in Vietnamese society.