The Euro’s Depreciation: What Should Businesses in Vietnam Expect

The euro plunged in value below parity with the US dollar in July 2022 – a 20-year low. The ongoing depreciation of the euro has many far-reaching economic impacts, not only within the Eurozone but also in partner countries like Vietnam. Vietnam Briefing analyses the influence of the devaluation of the euro on businesses in Vietnam. At almost the same value as the US dollar, the euro’s depreciation is now a burden for European economies as they face soaring inflation and a vulnerable business environment post-pandemic.

There are two main drivers behind the depreciation of the euro. Chief among these is the interest rate hike by the US Federal Reserve (Fed) which has driven up the appreciation of the US dollar. To curb inflation, the Fed raised its benchmark interest rates by up to 0.75 points, citing a recession risk. Meanwhile, the European Central Bank (ECB) is caught up in a dilemma: while it identifies a need to raise the interest rate to cushion soaring inflation, the EU economy is still vulnerable after the pandemic and would suffer from high-interest rates.

Another reason is soaring inflation due to the shortage of energy supplies caused by the Russia-Ukraine crisis. The EU is heavily dependent on energy supplies from Russia and therefore, energy supply shortages have pushed up prices for Europeans already struggling to recover from the pandemic.

The depreciation of the euro not only has consequences for the EU but also has implications for other economies, such as Vietnam.

What does the euro depreciation mean for Vietnam’s imports?

Indeed, importers in Vietnam can take advantage of the euro depreciation to buy more goods from European partners since they are now cheaper. Especially, Vietnamese businesses in the pharmaceutical, fashion, computers, wheat, and electrical sectors – the main industries that Vietnam imports from the EU should see this period as an opportunity to purchase more goods from the EU with the same amount of investment. This can thus contribute to profits, and they can also scale up their inventory of materials and goods that otherwise cost more.

A point to note is that the aforementioned case is applied for contracts with payment in euros. Meanwhile, contracts with European partners in US dollars see little to no impact.

What does the euro depreciation mean for Vietnam’s exports?

The Vietnam-EU export sector may bear the most considerable influence whether the payment currency is in USD or euro.

First, as the euro currency depreciates, Europeans’ purchasing power deteriorates. Their demand for non-essential goods is weakened, which means lower demand for imported goods from Vietnam as well as other countries.

The impact can already be felt in industries such as wood/wooden furniture exports and seafood exports in Vietnam as businesses are receiving fewer orders from EU partners. The export value to the EU in these industries in the last two quarters of 2022 is also projected to drop significantly compared to the first two quarters when Vietnam hit a trade surplus with the EU.

Second, as the majority of contracts are signed in US dollar payments, more importers in the EU are now reluctant to buy from their Vietnam partners as conversion rates are higher adding to increased costs. This also means imported products from Vietnam are subject to higher prices when converted into euro from US dollar, thus discouraging European consumers from buying imported goods.

Third, exporters in Vietnam are likely to face losses as the euro depreciates. Businesses engaged in contracts with payments in euros may see their profits fall as the same amount of payment in euros is now exchanged for less value in Vietnam Dong, which undermines the profits of exporters.

For businesses headquartered in the EU but have operations in Vietnam, they stand a chance of increasing their profit as the value in Vietnam Dong can be converted into more euros.

For businesses headquartered in Vietnam but have operations in Europe, however, are at risk of losing value as the profits they make in the EU will be exchanged for lesser value in the Vietnamese currency.

What to expect if the euro continues to depreciate?

The future of the European currency holds uncertainties as the ECB has yet to make any clear announcements about its upcoming decisions. However, experts hold that as energy supply disruption by Russia is likely to continue if not get worse, the continuing depreciation of the euro is inevitable. Some warn that the value of one euro may eventually fall to as low as US$0.90.

The ECB is expected to raise its benchmark interest rate by 0.25, yet this move is considered to be of modest efficiency as the Fed has even declared to bring up the rate for the fourth time this year.

Businesses in Vietnam impacted by the devaluation of the euro should be prepared for further depreciation and factor the loss in their budgets. While the EU is a significant market, exporters in Vietnam should look to hedge and diversify their markets outside the EU in the short to medium term to avoid profit losses as demand for imported goods in the EU becomes unstable. 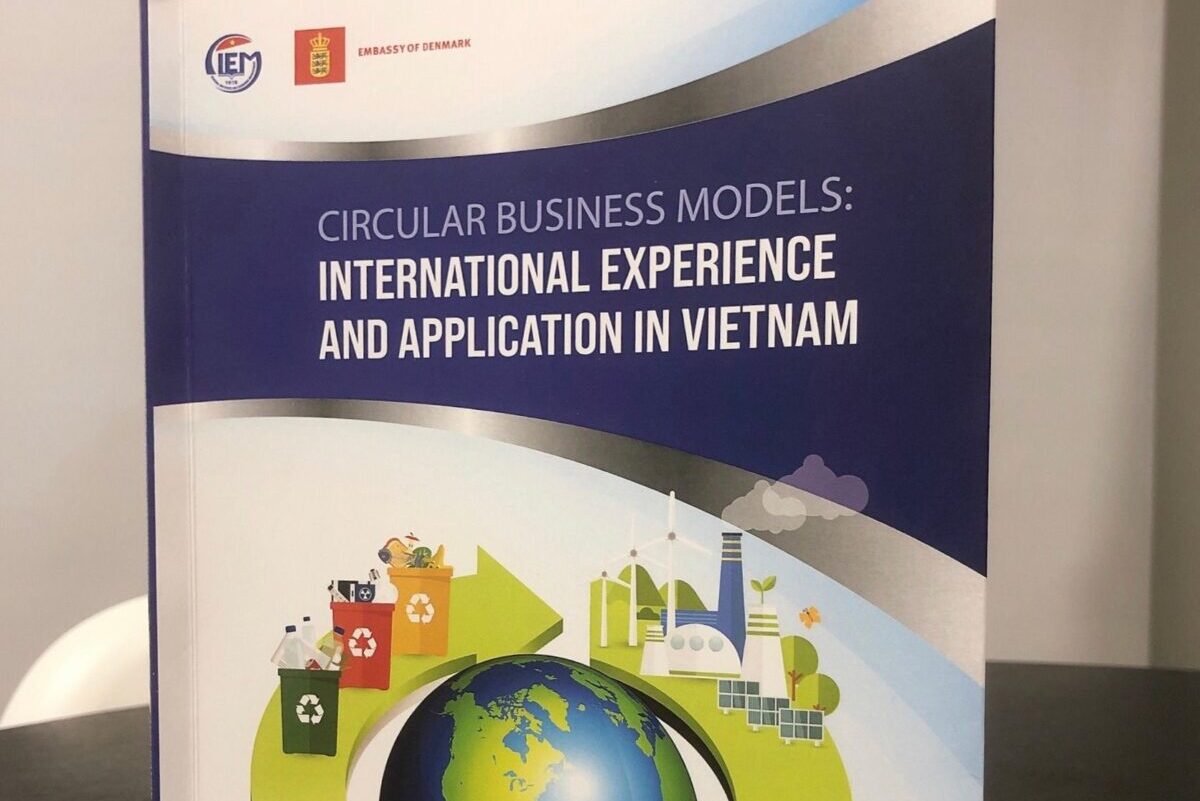 To read more about Danish experiences on circular economy and the green transition, take a look at “State of Green”, which is an internet platform and useful one-stop shop for Danish experiences on green transition. On the webpage, you can connect with leading Danish stakeholders working to drive the global transition to a sustainable, low-carbon, resource-efficient society. You will also find more than 20 white papers on circular economy, sustainable energy, cities, etc.

The Central Institute for Economic Management (CIEM) and the Embassy of Denmark in Vietnam hosted a launch workshop for a report on “Circular Business Models: International Experience and Application in Vietnam” in Hanoi on the past Friday, 19 August 2022.

The event announced the findings of a study on the current status of circular business models and recommendations to facilitate the development of these models in Vietnam.

During the workshop, topic discussed were about the importance of circular business, international experience in developing circular businesses and the current situation of this type of business model in the country.

CIEM Deputy Director Nguyen Hoa Cuong said that many Vietnamese businesses have shifted to circular business models which align with regulations and policies in support of sustainable development.

About 135 Danish firms have opened branch offices in Việt Nam so far and the firms are actively contributing to the growth of various sectors including agriculture, according to Deputy Minister of Agriculture and Rural Development Phùng Đức Tiến.

The deputy minister was speaking at the seminar “Danish experiences and solutions in sustainable agri-food production” on August 17.

Tiến underscored Denmark as one of the leading countries in agriculture and sustainable development. Denmark’s experiences, he believed, would help Vietnamese firms speed up on the road to high-tech and climate-smart agriculture.

Sanne Hoj Andren, Sector Counsellor for Agri-Food at the Embassy of Denmark, revealed that strategic sector cooperation (SSC) is a partnership between Danish public authorities and Vietnamese ministries.

Đinh Phạm Hiền, PSAV Secretariat at the Ministry of Agriculture and Rural Development’s International Cooperation Department, said that the Partnership for Sustainable Agriculture (PAS) was a World Economic Forum initiative aimed at promoting sustainable agriculture worldwide.
Việt Nam institutionalised working groups into PAS in 2015 and the Partnership for Sustainable Agriculture in Việt Nam (PASV) was tasked with bringing together players in the agricultural sector to establish value chains of Vietnamese produce.

The PASV has increased farming productivity by 17 per cent and farmer incomes alike, and at the same time, cut CO2 emissions by 43 per cent. The initiative has also helped value chains meet international standards.

Jeppe Sondergaard Pedersen, International Chief Adviser of the Danish Agriculture and Food Council, said Denmark had 4,121 organic farms that cultivated 310,000 ha of land in 2020.
Given so much land claimed by cultivation, the country has to become more sustainable by embracing circular production and resource-efficient approaches. Its produce remains competitive through higher yields and increased efficiency, more value added, and the entrance to new markets.
Troels Vensild, Head of the Danish Veterinary and Food Administration’s International Cooperation Division, underscored Denmark as among the world’s most sustainable food producers.
Green transition is key for Danish firms to export sustainable products, resource-efficient solutions and technologies globally.

The Vietnamese medical devices market, which is growing annually at more than 18 per cent, relies heavily on imports, representing significant opportunities for foreign businesses, according to the HCM City Medical Equipment Association.

The market is now worth US$1.5 billion, up from US$1.1 billion in 2017, Hứa Phú Doãn, deputy chairman of the association, said.

Domestic medical devices manufacturers make mostly basic stuff and meet only 10 per cent of demand while the remaining 90 per cent is imported, he told a meeting held recently in HCM City.
The number of foreign manufacturers in Việt Nam remains modest due to the lack of development of supporting industries and the absence of an industrial cluster in this sector, he said.

Foreign investment in the production of medical devices is vital to reduce reliance on imports and facilitate development of supporting industries serving the healthcare sector, he said.
The 20th International Medical, Hospital & Pharmaceutical Exhibition, which opened in HCM City on Thursday, serves as a platform for foreign businesses to explore partnerships and investments in Việt Nam, he said at the inaugural ceremony.

Vietnam Medi-pharm Expo 2022, with its larger scale and exhibitor portfolio, is also a great opportunity for local businesses to access advanced technologies and specialized equipment in the pharmaceutical and medical device sectors, he added.

The expo brought together 260 exhibitors from 20 countries and territories, with businesses making pharmaceuticals and functional foods accounting for half of them.

The expo at the Saigon Exhibition and Convention Centre, organized by Vinexad JSC in collaboration with the association wrapped up on Saturday.